What is an Angora Ferret ?!

The angora ferret is still a relatively new breed It is said that they were created 25-30 years ago.

The Angora originated in Europe at a Scandinavian breeding facility while they were being bred a worker in the facility noticed that some of the ferrets were developing longer coats then the others especially on the rear end of the ferret.

The long coated ferrets were then selectively bred and soon breeders in the facility achieved the angora ferret that we see today in USA and all around Europe.

The angora ferret has the same health issues, behavior and sass as your typically standard ferret. They just have 4x the amount of coat. The coat on an angora can grow anywhere from 3-6 inches in length.

The undercoat is just as long as the top coat and gets very fluffy in the fall and winter.

​Due to the undercoat being the same length as the top coat it is commonly seen that angoras have a lack of undercoat because there is no short insulating layers close to the skin. 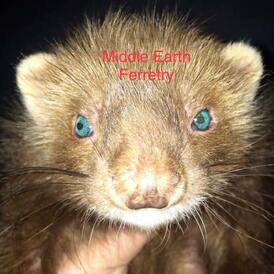 It can take a couple of years for the coat to grow to its full potential. Normal seasonal shedding still occurs each year with angoras. There coat will be shorter in spring/summer and longer in fall/winter. The angora coat does not need any special grooming requirements or maintenance then your typical standard ferret. There is no need for brushing and the coat does not tangle easily.
The above Diagram is courtesy of Jackanapes Ferretry in Switzerland. It perfectly demonstrates the way in which the coat of an Angora Ferret differs to that of a shorthair ferret. The black hairs represent the Top Coat. These are the guard hairs and the ones that generally hold the ferrets color pigmentation. The top coat is straight and smooth in appearance. The white squiggly hairs represent the Under Coat. These hairs are the insulating hairs that hold the ferrets body heat.
On the standard ferret the undercoat is significantly shorter then the top coat. It is often not really seen unless you part the hair to the skin. It will be very soft and you will be able to visually see the squiggly crimped effect of this type of coat. On the Angora the undercoat is the same length as the top coat and you can see the squiggly hair tips very clearly.

As you can see from these diagrams the common misconception of angoras not having an undercoat is debunked. 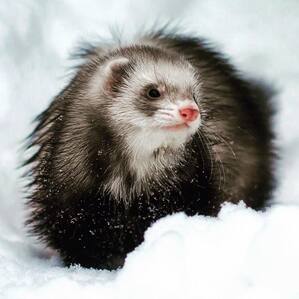 The gene pool with angoras is very small (Limited) sadly the breeding done on fur farms that started the angora also brought with it a couple of undesirable traits.
​
Several breeders in the USA and in Europe are currently working on trying to fix these issues and address them. One of the biggest issues is that the full angora jills cannot raise or milk there young. The full angora jill has an extremely hard time nursing her kits and producing milk. Essentially the milk dry’s up within the first 24 to 48 hours of birth of her litter and a surrogate mother must always be used. We have found that by adding standard ferrets into the gene pool and out crossing and bringing in new healthy bloodlines the milk issues can be rectified if using a Semi and ½ Angora Jill.

The second trait of a Full Angora is the “Nose Cleft Mutation” The nose on a full angora can be quite different to that of a standard ferret. It can have extra skin folds near the nostril area, or fine hairs that grow inside and outside the skin folds of the nostril. Breeding ferrets with deep clefts is genetic and will pass off onto there offspring. Deep clefts can cause a series of medial issues for your ferret later down the road such as Upper Respiratory Issues and Difficulty Breathing. Reputable breeders in USA and Europe are working hard to breed the cleft out of the angora but still keep the desired coat length.

An angora breeder should aim to achieve full angora ferrets but with a normal standard nose (No clefts).
IT is important for breeders to take Caution when researching pedigrees and importing new bloodlines from overseas to keep there ferrets in there breeding program healthy and strong.
The angora is already a rare and can be difficult at times to breed.
The cost of full angoras varies between breeders but ranges anywhere from 350 to 600.

Here are some examples of angora noses there are many variations. Some have large folds, some small folds, some with less noticeable clefts. The same goes for the hair growth some hair can be present on the nose and others have no hair at all.
​
​
​Here are pictures of Full Angora Ferrets
​Angora ferrets can be divided into several categories dependant on the length of coat. The full angora is defined as the long hair type of ferret commonly seen with nose fold and what people call a lack of undercoat which is generally referred to as Full Angora or 100% angora bloodines.

After the full angora the rest of the “Angora Type” ferrets are just dilutions of the Full Angora Gene.
​
Here is a picture of a Full Angora Ferret with clefts (Left and without clefts Right).
​A semi Angora is the next step down from the full angora. They are the closest you can get to being a full angora without being completely full. The semi angora ferret will have very soft and fluffy coats but it will not be nearly as long as the full angora coat. Nor will it have a long undercoat or a nose cleft anything above 75% is considered to be a Semi.

Here is a picture of semi angora ferrets
The half angora comes next these ferrets usually come from a full angora hob x standard mother and have 50% angora bloodlines. The can be fluffy buy not nearly as fluffy as the semi and not even close to having the coat length of a full.

There is no difference in the half nose to the semi nose and no special grooming requirements.

Here are pictures of ½ angora ferrets
Lastly is the part/quarter angora these ferrets are generally defined as anything that has less then half angora in its pedigree and have 25% Angora Bloodlines. They are diluted with the standard ferret and have more standard coat then that of its counter partners the ½ and semi angora.

Here are some pictures of Part Angoras
Powered by